Talking to Gregg Mozgala: A Cultural Democracy in the Performing Arts Interview

The Brooklyn Commune’s Cultural Democracy and Representation Team, led by Kyoung H. Park, has designed an artist survey to invite artists to share their experiences working in the field in order to open up public discussions regarding diversity and inclusion in the performing arts. Over the course of the next few months, we will highlight interviews with artists who are in conversation with the Brooklyn Commune’s Cultural Democracy and Representation Team, and we invite members of our community to help us gather more information by completing our survey here. Our team will synthesize our findings and share these interviews and our findings online. 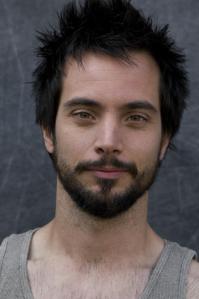 1.  How do you identify yourself? How does your identity influence or inform your work?

This is a complicated question for me.  I was born with cerebral palsy and my disability is a very large part of my identity.  In my own life, I don’t just hang out with disabled people.  Nor am I only interested in “disabled stories;” ones that more often than not show us triumphing over adversity.  I am a thirty-something crippled white guy.  I was the third of four children raised by a first-generation Italian mother with strong Catholic beliefs and a father who spent twenty plus years in the United States Navy.  I was born with a disability, but disability does not consume my life. Most of our lives are taken up with love, and loss, and work, and sex, and family and the day-to-day struggle for our lives —just like anyone else.

2. Do you face challenges in the field based on the way you identify yourself?

Challenges certainly exist.  To say there isn’t discrimination in our field against people with disabilities would be false.  Even though disabled characters have been appearing with more regularity in film and television, more often than not, able-bodied actors play them.  Often times they win awards for those portrayals.  The reasons for this are incredibly complex and multi-faceted, but to say that it’s just because producers or decision makers in the industry are narrow minded or more often than not, make “the easy choice” (while true to a large extent) seems myopic to me, and a cop out.  Culturally, we don’t have the clout or history of work that other minorities or marginalized groups have.  That’s something we need to work on.  Historically, I’d say we’re a good quarter of a century behind.  The ADA (American With Disabilities Act) came out twenty-five years after the Civil Rights Act of 1965.  There’s been activism and political movement surrounding Disability Rights for several decades now, but the exploration of disability through a cultural, artistic lens is still relatively new.  This is exciting in a sense, because it’s new and there’s a lot of possibility and potential, but new and undefined can be scary and comes with its own host of challenges.

3.  Where do you (or can you) locate representations of your culture [community] within contemporary performance?

Quality material for theatre artists with disabilities that concerns itself with the Disabled Experience in the twentieth and twenty-first centuries does not exist.  Who are our heroes, cultural icons and role models?  This is why I have created a new company called, The Apothetae.  It is The Apothetae’s goal to serve as an incubator for new works about disability in the hope that an entirely new canon of plays will be created.  Disabled people have existed since the dawn of time.  We have always been here, yet that history is largely unknown.  Through our work we will make that history visible; our contributions, our struggles, our triumphs and yes, even our failures.  In June, we had our first production, a musical adaptation of “The Penalty,” a 1920 Lon Chaney silent film about a legless gangster who swears revenge on the doctor who wrongfully amputated his legs as a child.  Clay McCleod Chapman (The Pumpkin Pie Show) wrote the script and Robert M. Johanson (Nature Theater of Oklahoma) wrote the score.  People may be curious why I chose to adapt an obscure silent film from 1920 as one of the first crop of commissioned works by The Apothetae. I have been fascinated by the film version of “The Penalty” since I first saw clips of it on an “American Masters” special profiling Lon Chaney several years  ago. The idea of a disabled revenge story captivated and intrigued me. The fact that the film came out in 1920 (and the book before that!) excited my imagination even further.

My own personal biography is filled with mixed feelings and emotions towards doctors and the medical community. For most of my life, I was led to believe that my disability was a direct result of medical malfeasance. When I first saw “The Penalty” I couldn’t help but draw parallels between what I perceived to be the story of my own “botched birth” and that of Blizzard, the criminal kingpin who vows revenge against the doctor who wrongfully amputates his legs following a childhood accident.  It wasn’t hard to see that there was something fascinating about Chaney himself. I knew very little about him before seeing the PBS special and subsequent research on my own. First and foremost, Lon Chaney contradicted the Hollywood ideal of beauty, glamor and romance. Both his parents were deaf and it was through non-verbal communication with them with which he mastered the art of pantomime. In addition, Chaney’s second wife, Hazel’s previous husband was a double amputee.  Beyond these real life coincidences however (or maybe because of them), throughout his career Chaney played myriad disabled characters imbuing each and every one of them with great strength and determination.  A core element of The Apothetae’s mission is to expand the current existing narratives that depict people with disabilities. Too often in today’s popular culture, we are painted as men and women who overcome adversity or act as symbols of pity and or inspiration. This wasn’t always the case. And while depictions of characters with disabilities throughout history may not have always been positive, I do not want to shy away from these stories. Hollywood producers in the early twentieth century certainly did not and neither did Lon Chaney. I feel great power rests in the retelling and  exploration of these stories and embodiment of these characters.  Like Lon Chaney, I have always felt a great affinity for the monsters and the villains. As he  (Chaney), eloquently stated in response to a fan letter inquiring why he played such dark, detestable characters, “…No matter how evil the characters are there’s some redeeming spot of good in them.”  Blizzard has overcome a great deal of adversity in his world to become a great power on the Lower East Side. He is challenging because he is dark, complex and let’s face it-EVIL. Underneath the universe of blood, thunder and tears however, beats a human heart.

4. Are there moments in which your cultural identity [community] is misrepresented or underrepresented, and how do you address this?

The disabled community is incredibly varied and complex.  Disability crosses all socio-economic, political and racial lines.  Unlike an ethnic minority, there is no specific country or culture to look back to for particular inspiration or historical context.  In addition, the experience of someone with cerebral palsy for instance, is very different from that of an amputee or someone who is visually impaired or suffering post-traumatic stress syndrome.  There are commonalities to be sure, but I believe what makes disability hard to define and codify is the same thing that makes it inherently dramatic in nature.  It is my firm belief that the artist’s job is never to say, “this is the way things are,” or “this is what you should think about this,” but rather explore the questions surrounding the issue and make them visible.  Every time I work I want the questions to become clearer.  The creation of new works and the re-appropriation of existing works help frame our experience in a historical context while simultaneously creating new mythologies.  It finally allows us to take ownership of our personal and collective identity.

5. Have you been a working artist in another culture [community]? Has this experience exposed something about current practices that we can learn from?

A few things I’ve learned from working in other cultures/communities:  There’s more than one-way to do things.  Perception is everything.  Art is a common denominator in all cultures.  The creative drive or spirit is a universal.  Not everyone can create great art, but great art can come from anywhere.  Acting is easy.  Dance is hard.

6. Have you worked in other cities/regions and can you tell us about the reception of your work there in comparison to NYC?

New York City is a wonderful place but it is a hard place to live.  It’s a hard place to create work and have work thrive.   When I’ve been fortunate enough to work regionally or out of the country, I feel more at ease, more relaxed and even more adventurous personally and professionally.  I feel my work benefits greatly from a change of scenery.  I’ve worked a lot in Washington, D.C. through connections with VSA Arts and The Kennedy Center.  I’ve been there in all sorts of capacities, as a performer, writer and an artistic director.  The scene there is really wonderful and diverse.  All the actors and directors I’ve met and worked with are incredibly talented and generous.  The nature of the scene allows for more consistent work on a variety of projects from everything to classical to experimental.  As a result everyone brings an incredible flexibility and alacrity to their work, which is really exciting to see and be a part of.  Not to say that this doesn’t exist in New York City (this town has everything), things seem a little more compartmentalized and pressurized here, but that’s the nature of this town.

7. Describe an ideal situation in which your work is presented. Is there anything you’d like your audience to know about you before viewing your work?

As I take on this new role as artistic director and producer, I’m realizing just how difficult these roles are.  Anyone can put up one show, but how does a company survive long term and become self-sustaining overtime?  I’ve been overwhelmed by the show of support from my peers and colleagues within the Theater community whom have offered everything from advice to space in which to develop and produce the work- all for which I am very grateful.  I have a company with a specific mission, but the challenges I’m facing now are no different from the challenges of any new, developing company.   Fortunately, I’m not reinventing the wheel here so there are models to follow for success.

Gregg Mozgala is a critically acclaimed actor and playwright.  Gregg has been in various New York productions Off- and Off-Off Broadway with Rattlestick Playwrights Theater, The LAByrinth Theatre Company, La Mama ETC, Performance Space 122, Theater Breaking Through Barriers, Foolish Theatre Company, The Brick Theater, The National Theatre Workshop of the Handicapped, Visible Theatre and the Ensemble Studio Theatre.  Regionally, he has appeared on stage at the Kennedy Center For The Performing Arts and the Spoleto Festival USA.  He has worked internationally in London, England and Zagreb, Croatia.  He has participated in Northeast Public Radio’s Playing On Air series with Mammie Gummer and Tony winning director, John Rando. He has been profiled in the New York Times on several occasions, most notably for his ground breaking work with choreographer Tamar Rogoff, which was also featured on CBS Sunday Morning and Good Morning America.  Their experience is the subject of the soon to be released documentary, “The Faun Experiment”, currently in post-production.

Artistic Director, Pacific Beat Collective
View all posts by kyounghpark »
« TALKING TO NEJLA Y. YATKIN: A CULTURAL DEMOCRACY IN THE PERFORMING ARTS INTERVIEW
THIS IS AN ART PROJECT ABOUT THE FUTURE OF PERFORMANCE »